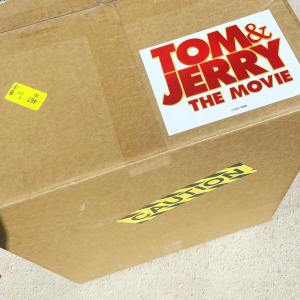 If you follow me on Instagram, you know I received a HUGE box of goodies from Warner Bros. and Tom & Jerry to celebrate the release of their movie. Tom & Jerry The Movie comes to Theaters and HBO Max tomorrow 2/26/2021.

I grew up watching Tom & Jerry Cartoons, and I’ve shown some to my kids too. They love the crazy antics and adventures. We are looking forward to watching the movie Friday night on HBO Max.

One of the most beloved rivalries in history is reignited when Jerry moves into New York City’s finest hotel on the eve of “the wedding of the century,” forcing the event’s desperate planner, Kayla, to hire Tom to get rid of him, in director Tim Story’s “Tom and Jerry.” The ensuing cat and mouse battle threatens to destroy her career, the wedding, and possibly the hotel itself. But soon, an even bigger problem arises: a diabolically ambitious staffer conspiring against all three of them.

An eye-popping blend of classic animation and live-action, Tom and Jerry’s new adventure stakes new ground for the iconic characters and forces them to eventually do the unthinkable… work together to save the day.

If you want to get into some mayhem and mischief, check out these awesome goodies and activities to get your family ready for the movie!

I posted in May About Scoob , which is a super cute/fun movie that all of us loved. Well now that Scoob is out on  DVD, Blu-Ray and 4K UHD, I have an awesome Prize Pack Giveaway, courtesy of our friends at Warner Brothers.

If you missed my first post, here is all about this really funny movie: In Scooby-Doo’s greatest adventure yet, see the never-before told story of how lifelong friends Scooby and Shaggy first met and how they joined forces with young detectives Fred, Velma and Daphne to form the famous Mystery Inc. Now, with hundreds of cases solved, Scooby and the gang face their biggest, toughest mystery ever: an evil plot to unleash the ghost dog Cerberus upon the world. As they race to stop this global “dogpocalypse,” the gang discovers that Scooby has a secret legacy and an epic destiny greater than anyone ever imagined.

The Prize Pack includes a Blu-Ray/Digital Download combo, a cute plush Scooby Do, cute crafts, a Mystery Machine Popcorn bowl, and so much more!

Entering is easy! Leave a comment on this blog post with your favorite Scooby Do memory. I love it when the gang teamed up with the Harlem Globetrotters! I’ll pick a winner on Monday July 27th mid-day and email the winner.

This Giveaway is open only to San Diego, CA area residents, and the winner will have to arrange to pick up the box of goodies. If you enter and win and live outside San Diego, CA, you will have to pay for postage/shipping.

Thanks to the peeps over at Warner Bros. for sending me this awesome offer to share with ONE of my readers!

“SCOOB!” reveals how lifelong friends Scooby and Shaggy first met and how they joined with young detectives Fred, Velma and Daphne to form the famous Mystery Inc. Now, with hundreds of cases solved and adventures shared, Scooby and the gang face their biggest, most challenging mystery ever: a plot to unleash the ghost dog Cerberus upon the world. As they race to stop this global “dogpocalypse,” the gang discovers that Scooby has a secret legacy and an epic destiny greater than anyone imagined.

Scoob is available on May 15th for 48-hour Rental via Premium on Demand for $19.99 or premium digital ownership for $24.99, check your digital platform for more details, or visit this website.

If you haven’t seen the trailer, check it out here.

Entering to win is Easy Peasy! Leave a comment on this post with your favorite Scooby-Doo memory. Your favorite episode, crossover, movie, Scooby-doo related foods or snacks, whatever you love about Scoob and the gang!

I will pick a winner on May 15th mid-morning, and email you the code.

It was so cute! If you are looking for a cute family movie to watch this holiday season, Smallfoot is perfect! And you are in luck, because today, December 4, “Smallfoot” will be available to own in high definition and standard definition from select digital retailers including Amazon, FandangoNOW, iTunes, PlayStation, Vudu, Xbox and others. On December 11, “Smallfoot” will be made available digitally on Video On Demand services from cable and satellite providers, and on select gaming consoles.

If you are like us and love the Dvd/BluRay/Digital combo pack, that will be released on December 11, 2018.

Smallfoot is an animated adventure for all ages, with fun new music by Zendaya & Common and featuring an all-star cast, “Smallfoot” turns the Bigfoot legend upside down when a bright young Yeti (Channing Tatum) finds something he thought didn’t exist—a human! News of the “smallfoot,” Percy (James Corden), throws the simple Yeti community into an uproar over what else might be out there in the big world beyond their snowy village.  This is an epic story about friendship and courage!

I am so excited to give away a copy of Smallfoot to one reader! Entering is easy: Just leave a comment on this post- What is your favorite holiday tradition? Looking at Christmas lights, caroling, a special family meal, midnight mass, ugly sweaters?

I’ll chose one winner on 12/10/18 and notify the winner via email and will be shipped directly to the winner by the giveaway sponsor.